“This program has not just been an excellent way to develop both teaching and linguistic skills, but an opportunity to explore someone else’s world and learn from the experience.”

Hi, I’m Ali and I’m an incoming fourth-year undergraduate at the University of Virginia. I began participating in Banaat Connect in January 2017. As the program continued, not only did my Arabic speaking confidence improve tremendously, but I quickly and genuinely became good friends with my partner, Isra’a. When our first session ended we immediately made plans to continue to the next session together, and we plan to once again in the fall! I’ve never been naturally apt at learning new languages, though I enjoy them, which has always made it difficult for me to persevere through language classes in school. However, not wanting to disappoint my friend who believed in me and provided encouragement, kept me motivated to give each meeting my best effort.

In April of this past year, my “Examining Sustainability in Place: The Environment of the Middle East and Southern Asia” class’s final project was to investigate an environmental factor in the region. After having developed a relationship for four months with Isra’a, who lives in the Jerash refugee camp in Jordan, I decided to investigate the availability of water resources for the residents who lived there with her. The director of the Jerash facility, Amna Abu Zuhair, graciously agreed to an in-person interview over Google Hangouts to assist me in my research. I spent a few days simply gathering information from the interview, United Nations reports, news articles and more. Shockingly, I learned that an underground sewage system within the camp was a recent development.  The previous conditions were not just inconvenient, but unsanitary and unsafe. In addition, residents seeking refuge from Gaza rarely hold Jordanian citizenship, and therefore lack the rights and voice associated with such. As an extremely water-deprived country, all of Jordan’s inhabitants face a challenge for fresh drinking water, and the summer particularly proves to be an unfailingly strenuous experience.

Given this, I gained even more respect and admiration for all of the women participating in Banaat Connect, and am so grateful to have the chance to hear about their lives, interests, and perspectives. This program has not just been an excellent way to develop both teaching and linguistic skills, but an opportunity to explore someone else’s world and learn from the experience. If you are considering joining or simply learning more, I cannot emphasize enough the special place this program and my partner has had in my life. You won’t be making a mistake! 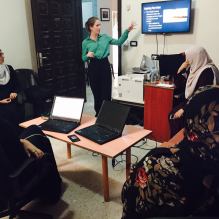 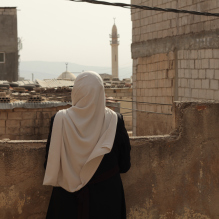